The search for a principal at the elementary campus has wrapped up and I am delighted to announce that Mr. Paul Turkin has accepted this administrative position for the next school year. Mr. Turkin (pictured) comes to us from Langley Christian School where he teaches a grade 7 class. Mr. Turkin has 20 years of teaching experience and has had the rare experience of having taught one subject in every grade from kindergarten through grade 12. This includes kindergarten PE and English Literature 12 of which the kindergarten class was the most demanding. Mr. Turkin says, “Those kindergarten children sure have energy.” Mr. Turkin also brings 5 years of administrative experience from Cornerstone Christian School in Coquitlam.

This principal assignment is an interim position for one year. It is understood that Mr. Turkin will be on an administrative loan from Langley Christian. This allows Mr. Turkin to return to Langley Christian at the end of the next school year and provides time and space for RCS to continue the search for a principal who is able to commit to a continuing contract. We are grateful to LCS for sharing their leadership staff with us.

Mr. Turkin has a range of professional experience. Currently, he serves on the board for CEBC (Christian Educators of BC) and SCSBC. (Society of Christian Schools in BC). His educational background includes undergraduate degrees in education and psychology and he is working on a Master’s Program in School Leadership.

Personal references describe Mr. Turkin as a warm-hearted man with a strong sense of compassion and relationship. I have every confidence that he will be a blessing to our school and a strong Christian leader for the elementary campus.

Your prayers for Mr. Turkin are valued as he completes his teaching assignment at LCS and transitions into a full and demanding principal role at RCS. Following is an open letter from Mr. Turkin to the community of the elementary campus.

“It’s a God thing.” You’ve probably heard that before. I know I have, and joining the team here at RCS is precisely one of those times. 2017 marks my 20th year in education, and during that, I’ve had the opportunity to teach at least one subject in every grade from K-12. I’ve held positions as Athletic Director, Department Head, and Vice-Principal. I’ve spent the last 5 years at Langley Christian Middle, and am currently working on my Master’s in Leadership at Dordt. Because I was happy at LCS, and enjoying my studies, I didn’t think that God had anything new for me on the immediate horizon. Well, once again, He showed me that He delights in surprises. Meeting the leadership team and staff at RCS, touring the campus, and seeing the halls filled with the happy faces of students told me that this is a special place, and I began, along with my wife, to explore the possibility that God was leading me here. RCS is rich in history, blessed with accomplishment presently, and facing an exciting future. I count it a privilege to join this community.

I’ve worn many professional hats over the years, but the best role I have is that of husband and father. I get to share this life with my wonderful wife, Jill, and our 5 children: Adam, Ryan, Elijah, Abigail, and Benjamin. As well as this busy, wonderful mix, we care for two adults with special needs in our home. Finally is our family dog, Joey, who sometimes is more work than everyone put together! What does our life look like? Well, we love music, sports, languages and reading, so our home often has someone off to a hockey or swim practice, piano or drum tutors, after school Mandarin lessons, or all three; and if you don’t think you can do that while reading a book, my kids will tell you different!

While it is a larger story for another time (drop by my office and I’ll tell you…bring coffee!) my decision to become an educator, and my philosophy of leadership, is heavily influenced by my own elementary school principal and his actions in my life. The intensely real manner in which the Lord made Himself known to me through him, and other educators in my life, provides the foundation of my professional walk with Him; and the relationship I have with my wife, children, family, friends and students, is directed by His gift of love and grace. I go forth to be His love and strengthening for those around me, encouraging others to do the same. That’s what school should do, shouldn’t it? It educates, of course, provides opportunity, socializes, and teaches what community really means. But in a larger sense, Christian education is a process of Christ’s love being made real, not just to our students, but also their families, the school staff, and our neighbors. I am given my story in order to be part of a larger story that is the school family.

I can’t wait to meet you, and begin this year’s story together.

I am pleased to announce that Mr. Chris Finch has been selected as the Vice-Principal of the Middle Campus. Mr. Finch is a respected and valued teacher at the middle campus and will be a strong and complimentary partner to Ms. Burton. To help acquaint you with our new vice-principal, I have asked Mr. Finch to share a short autobiography:

Mr. Finch is known for his passion for telling stories, and will frequently shoe-horn in references to Star Wars and The Lord of the Rings in his lessons, chapel talks, and conversations with anyone who will pretend listen to him. He is also famous for eating the same salad every day for lunch, his tendency to launch into spontaneous free-style rap sessions, and his rivalry with his arch-nemesis, Mr. Jackson Cheung. Mr. Finch loves watching movies with his wife, Andrea, and taking their toddler daughter, Hannah, to the aquarium. They are anticipating the arrival of their second child (a son) in August!

Mr. Finch grew up in Tsawwassen attending South Delta Baptist Church. He and his family can still be found there Sunday mornings, and Chris serves as a volunteer leader in the high school youth group. Grade 8 was a transformative year for Mr. Finch, as God challenged him to begin reading his Bible every day, to be baptized, and to take more leadership in his youth group. This is one of many reasons why Mr. Finch is passionate about teaching middle school students, as he loves helping them make their faith their own, just as he did at their age.

After a year of grounding himself in his faith and theology at Columbia Bible College, Mr. Finch completed a bachelor’s degree in Biological Sciences at the University of British Columbia. He returned to UBC to attain his bachelor’s degree in Middle Years Education, after which he was hired to teach at the RCS middle campus.

Immediately, Mr. Finch felt extremely welcomed and supported by the awesome staff community at RCS. In his first year, he taught Grade 7 part-time with the one and only Mr. Darrell Reimer, who was a wonderful partner to begin a career with! In his second year, he moved into a full-time position in Grade 8, and began leading the teaching ministry at middle campus chapels.

In 2016, Mr. Finch completed a Master’s of Education degree in Curriculum and Leadership at UBC. Through this process, and through assisting the middle campus administrative staff with curriculum coordinating, he sensed that God may be calling him into a new phase of educational leadership. Chris is both nervous and excited about his new role, and hopes that God will use him to support the students, staff, and families of RCS in a meaningful way. He hopes to see middle campus students experience great growth in their faith, and for the school to continue to develop a new and exciting vision for Christian education.

The RCS community is ‘an answer to prayer’

Community can be life-changing. Few know that better than Joshua H., an RCS student, and his mother, Michelle.

Until Grade 9, Joshua, who was born with a disability that makes him non-verbal and unable to walk, attended a public school in Vancouver. But instead of attending classes with his peers, he was segregated to a “life skills” class that spent a lot of time on field trips, but virtually no time on academics or relationship building.

“He just wasn’t being respected as a person,” said Michelle Gentis, Joshua’s mother. “He became very unhappy, and was clinically diagnosed as depressed. It was a real challenge to come to school every morning.”

A transfer to RCS changed everything. “It was a real answer to prayer,” said Ms. Gentis.

Does RCS have a robust, dedicated special-needs program? No. But the staff and students are dedicated to inclusion and community, and they care deeply about others—which is enough to change the world of a student like Joshua.

“He is respected and treated just like everybody else,” said Ms. Gentis. “He’s given responsibilities. And, of course, it’s all tailored to where he’s at. But they challenge him and include him. It’s changed his life.”

Joshua works with educational assistants who help him load his books into a backpack before he heads to class—the same class as his Grade 10 peers—on his own. They also work with Joshua on a modified curriculum. The other students in his English class are studying Julius Caesar. Joshua watched the film with the class, and now, with an EA’s help, he is learning to read using sections of the play.

In physical education class, “Josh is right there front and centre,” said Rob Buller Taylor, a teacher at RCS. Joshua participates in conditioning by stretching. When the class plays soccer, Joshua is the goaltender.

Earlier this month, the Grade 10 class went on a camping trip. RCS staff, including Michelle Contant, worked to make sure the activities would work for Joshua. The day before the trip, several of Joshua’s stronger classmates came to school early so they could, with the help of Ms. Gentis and an occupational therapist, learn to transfer Joshua from his chair, or lift his chair over rugged terrain, safely.

When the students went kayaking, they transferred Joshua into a kayak. When they went rock climbing, Joshua did too. With an EA and another caregiver supporting him from below, Joshua was able to grasp the rocks and pull himself up.

At the end of the camping trip, students wrote each other notes. “One of them in particular wrote, ‘Seeing you try hard to do everything made me try harder,’” said Ms. Gentis. “I think that speaks volumes.”

“He’s got an amazing, strong group of peers that just love this kid,” said Mr. Buller Taylor with a smile. “When a kid like Josh is included, he benefits. But the thing a lot of people don’t realize is it benefits the school. Seeing who the other students are becoming—their friendship with Josh has shaped them.”

Tim Roosma, one of Joshua’s EAs, echoes this. “He’s had a huge impact. Who he is and his personality is a joy in itself—his sense of humour, determination, and perseverance.”

His perseverance comes in no small part from his mother, who has fought to find a way for him all these years. “I can do all things through Christ. And we’ll find a way,” said Ms. Gentis. “It’s wonderful to be a part of a school where everybody’s going the extra mile, because that’s what Jesus did.” 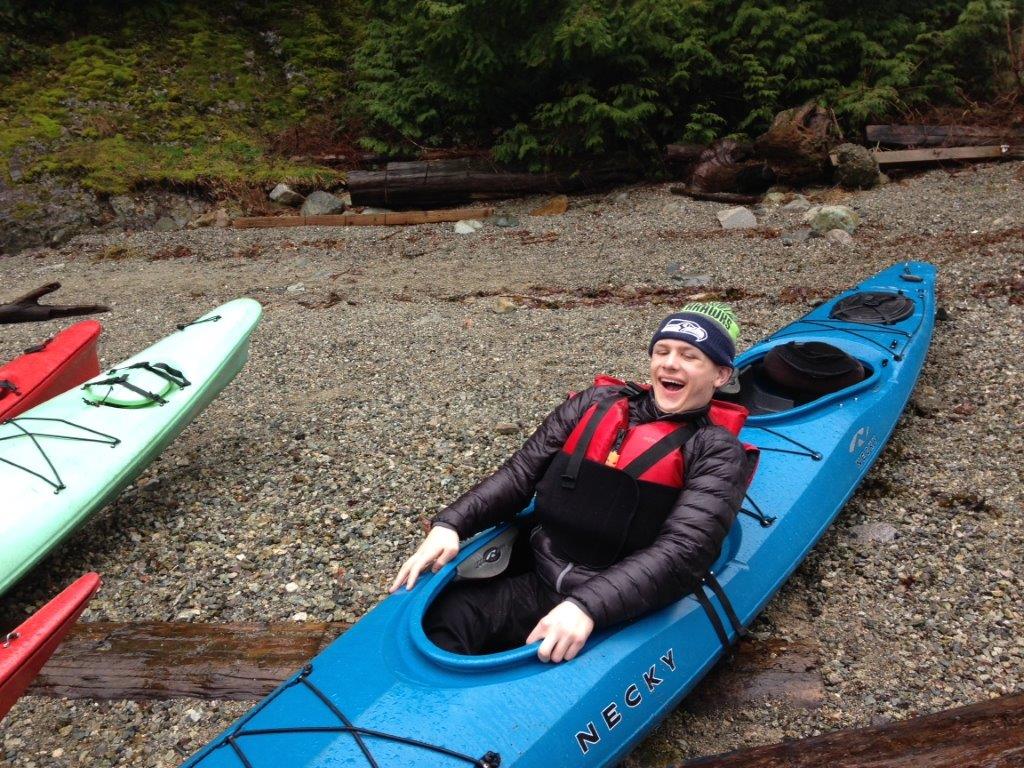 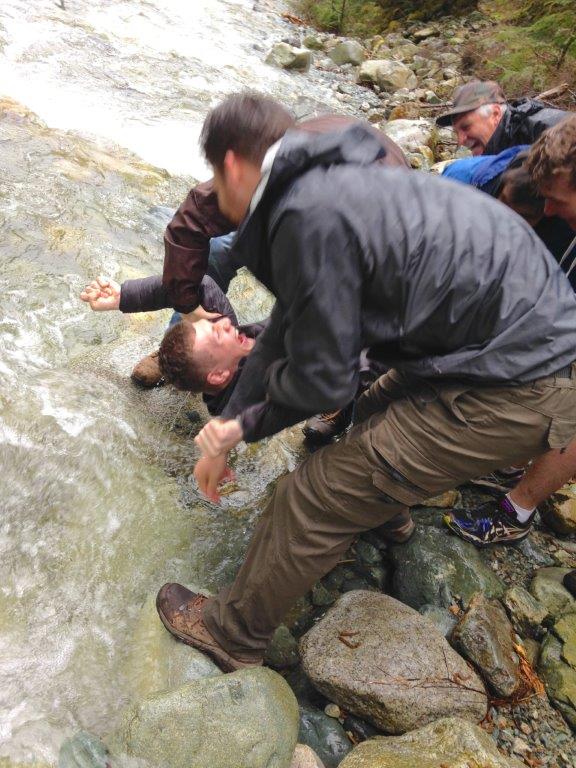 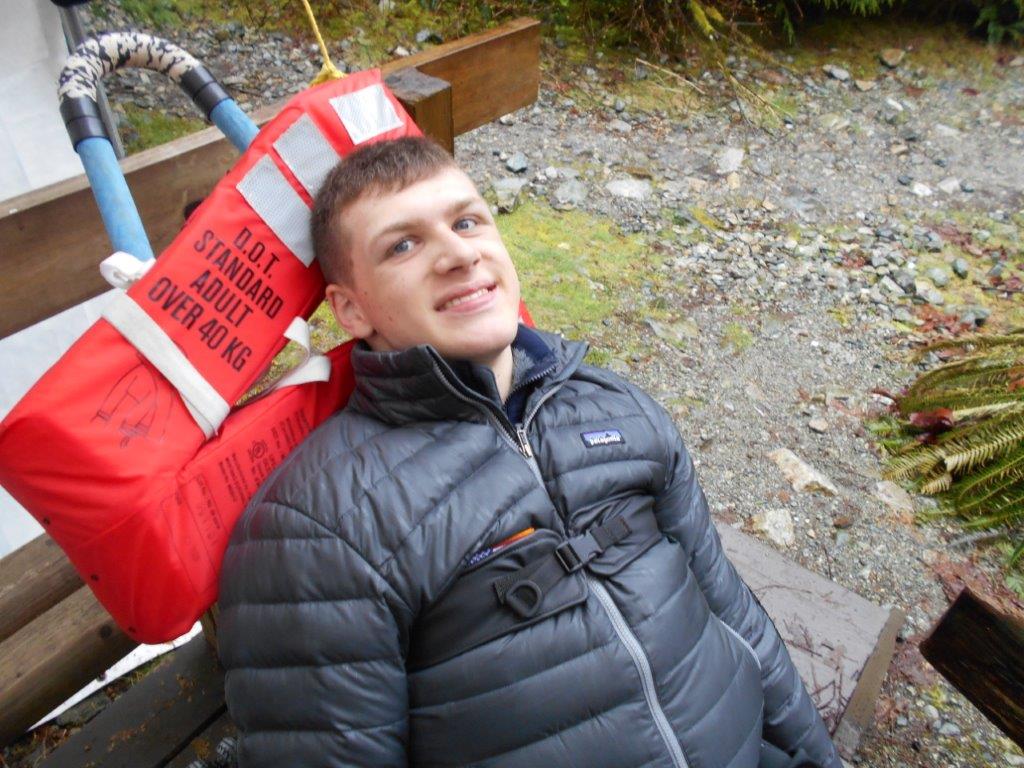 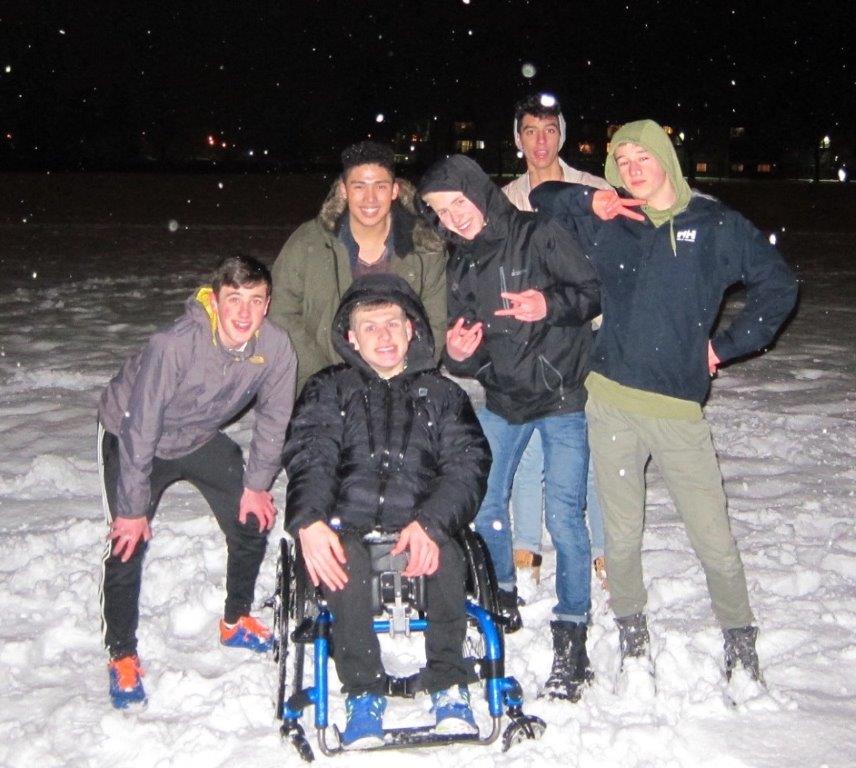 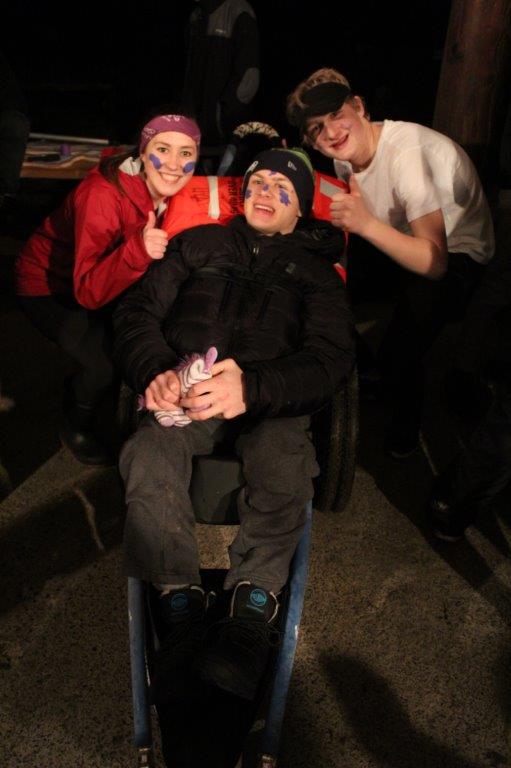 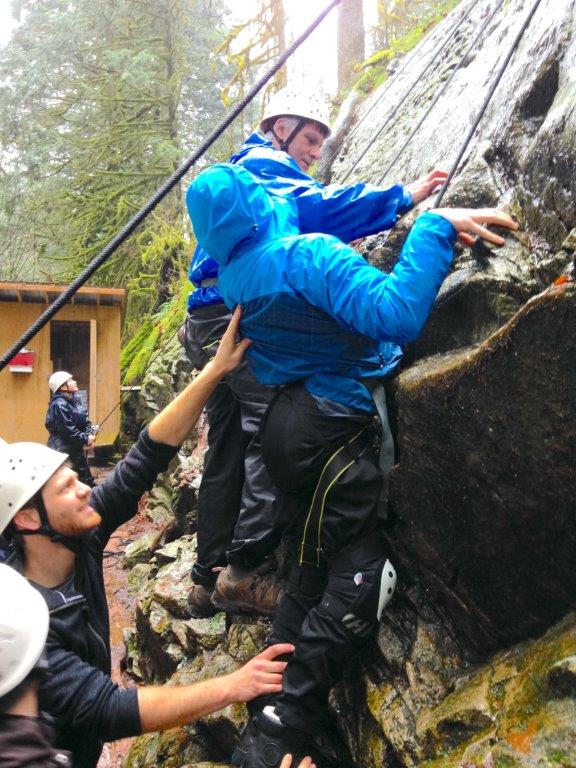